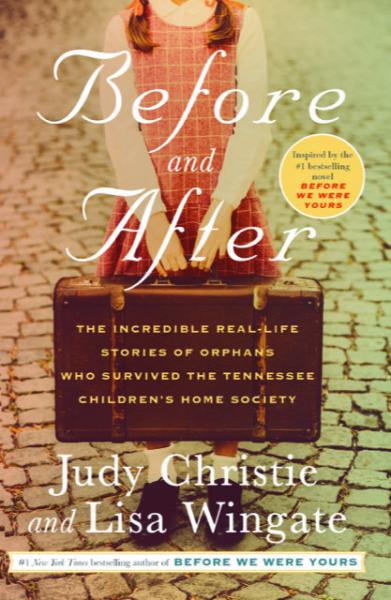 If you've read Lisa Wingate's bestselling novel Before We Were Yours, no doubt you experienced a range of emotions, from shock to sadness. But this book dredged up a more powerful, more personal response in a certain group of readers. Imagine stumbling upon the new release Before We Were Yours at the bookstore, or picking it up at the recommendation of a friend, or reading it along with your book club—only to find your own story in its pages. That's what happened to some actual adoptees of the Tennessee Children’s Home Society, now in their 60s or older, when this historical novel came out two years ago in the summer of 2017. Many of the adoptees, with little to no knowledge of their own childhood, subsequently reached out to Lisa Wingate; and she soon became a conduit for these former orphans, spread all over the country with one thing in common: they were survivors of the Tennessee Children's Home Society.

The statistics surrounding the Tennessee Children's Home Society (TCHS) are staggering: it operated in Memphis for more than 25 years, from 1924 to 1950; about 5,000 children passed through its doors; an estimated 500 children died while in its care. The orphanage was run by a woman named Georgia Tann, who used a plethora of unscrupulous methods to obtain children and deliver them to new parents, all while local and state leaders (including Memphis mayor E. H. "Boss" Crump) chose to look the other way. Tann maintained a paid network of doctors, social workers, and boardinghouse owners who helped her take babies and young children from poor families, or unwed mothers, or parents who believed they were relinquishing their children on a temporary basis while searching for financial stability. In some cases, Tann picked up kids from their own neighborhoods in her trademark black limousine and whisked them off to the TCHS for adoption. Essentially selling these children to families across the country—many of whom had been denied adoption by traditional agencies for one reason or another—Tann took in more than $500,000 just in the last 10 years of her life, an amount equal to $5 to $10 million today. In 1950, just as the scandal began to come to light, Tann was diagnosed with uterine cancer and died quickly, before she could ever be brought to justice.

Yet now the survivors are telling their stories and taking back the early days Tann sought to destroy. As more and more of the TCHS orphans—not to mention their children and grandchildren—contacted Lisa Wingate, she responded. She enlisted the help of friend and fellow writer Judy Christie, and together they listened, collected facts, and even coordinated a 2018 reunion of adoptees in Memphis's Elmwood Cemetery, the burial site for 19 children who died while at TCHS. Now they are ready to share the survivors' stories with all of us, in the riveting new nonfiction book Before and After: The Real-Life Stories of Orphans Who Survived the Tennessee Children's Home Society (releasing in October 2019).

As this collection makes clear, the Tennessee Children's Home Society changed the destinies of thousands of children and families. Many of the orphans were adopted by parents that were well off financially but had struggles with alcohol or other issues. Some of the parents were advanced in age and died within just a few years of adopting. Almost all of the adoptees were left with questions about their origins: Were they, in fact, adopted? Why did their birth parents give them up? Did they have sibilings? Despite these uncertainties, some of the adoptees managed to find hope and empowerment for themselves. Still others never found peace. Yet, thanks to this new book and to two authors determined to track a story to its source, many of the orphans' families are finding the truth.

We hope our Huntsville readers will join us for a rare opportunity to hear some of these stories, at the Community Conversation with Lisa Wingate and Judy Christie on October 29. (Click the picture below for details about the event and ticket information.) We are pleased to welcome a special guest that night: Huntsville resident Sallie Brandon, who is a survivor of the TCHS. She will join the authors on stage at the end of the evening to answer questions about her own history as an adoptee.

As Lisa writes on her website, "Family stories shouldn’t be lost. They’re meant to teach the next generation, to help us understand who we are. All things are temporal in this world, but our stories can remain long after we’re gone."