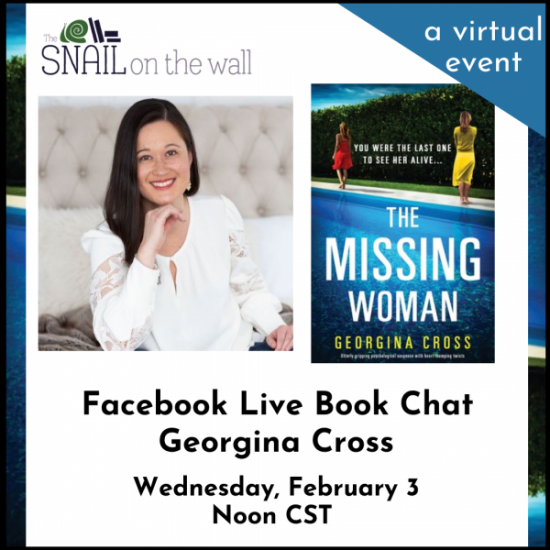 Join us on Facebook for a chat with Huntsville author Georgina Cross, who will tell us more about her new thriller, The Missing Woman.

About The Missing Woman:
They live in the big houses on the pretty street. Those other women, as we call them. And to think I used to want to be like them, to have their money and happiness, to live and laugh and play like them. Not any more. It's the fourth of July and the whole town is gathered at the local pool. Through the sweltering afternoon, we single mothers don't mix with the other women-the ones with the perfect lives and happy marriages. Women like Sabine Miller. But when Sabine shoots me a desperate look across the water and suddenly disappears, my blood runs cold... Running to the back gate, all I find is a silver charm bracelet she dropped on her way out. I convince myself I'm imagining things until Sabine's husband Mark appears. When he realizes she's missing, he phones the cops straight away. "Someone has been threatening Sabine," he says. "Now they've kidnapped her." Hours later, I wish I'd run faster. The whole town is searching the streets, calling Sabine's name over and over. On the TV, Mark is begging for someone to bring his wife home. The truth is, I was the last person to see her alive-and it's killing me inside. Now the cops are at my door asking questions. I'm terrified they'll find out what happened years ago between me and Sabine. Something I've never told anyone. But I need to tell someone. Can you keep a secret?

About Georgina Cross:
Georgina Cross, based in Huntsville, is the suspense author of THE STEPDAUGHTER and THE MISSING WOMAN published by Bookouture, Hachette Publishing. NANNY NEEDED will release on October 5, 2021, with Ballantine, Penguin Random House.