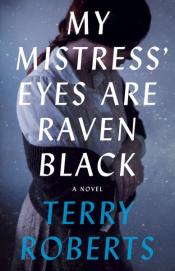 About My Mistress' Eyes Are Raven Black:
Ellis Island, 1920. New York Harbor's immigration and public health authorities are slowly recovering from the war years when a young, pregnant Irish woman disappears from the Isolation Hospital on Ellis Island. Stephen Robbins, a specialist in finding missing persons, is assigned the case. Yet when he arrives at the isolation hospital, he discovers an inexplicable string of deaths and disappearances among immigrant patients...and a staff that seems to be hiding a chilling secret. Stephen finds an ally in Lucy Paul, an undercover nurse who is also investigating the mysterious incidents. Together, they begin to unearth a horrifying conspiracy masked beneath the hospital's charitable exterior. As Stephen and Lucy get closer to the truth and each other, they are swept directly into the danger haunting Ellis Island and become the next targets. Amidst growing racial tensions in the wake of World War I, My Mistress' Eyes are Raven Black explores the disturbing lengths to which people will go to protect racial purity and condemn those they fear.

About Terry Roberts:
Terry Roberts’s direct ancestors have lived in the mountains of Western North Carolina since the time of the Revolutionary War. His debut novel, A Short Time to Stay Here, won the Willie Morris Award for Southern Fiction, and his second novel, That Bright Land, won the Thomas Wolfe Memorial Literary Award. Both novels won the annual Sir Walter Raleigh Award for Fiction. As well as being an award-winning novelist, Dr. Terry Roberts is a lifelong teacher and educational reformer. Since 1992, he has been the Director of the National Paideia Center, a school reform organization dedicated to making intellectual rigor accessible to all students. Born and raised near Weaverville, North Carolina, Roberts currently lives in Asheville with his wife and three children.