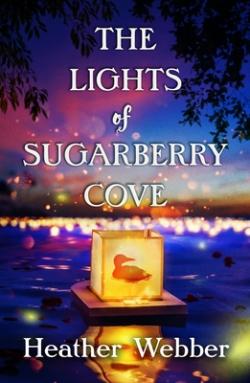 ORDER a SIGNED COPY of The Lights of Sugarberry Cove, by Heather Webber.

The Snail on the Wall is pleased to bring you a SPECIAL OFFER for Heather Webber's new novel set in Alabama. The author is personally signing copies just for The Snail on the Wall, since our Alabama bookstore loves to support Heather's Alabama novels. Your order will include a bonus: a digital copy of Heather's own recipe for Southern Banana Pudding.

To order: add the book below to your cart, and type "signed copy" in comments at checkout. This is a special offer available only through Huntsville's independent bookstore, The Snail on the Wall, in partnership with Tor/Forge Books.

Heather Webber captures the magic of our state so well! We're pleased to be a part of this new novel's launch as we have been for her previous two novels, Midnight at the Blackbird Cafe and South of the Buttonwood Tree.

About The Lights of Sugarberry Cove:
Sadie Way Scott has been avoiding her family and hometown of Sugarberry Cove, Alabama, since she nearly drowned in the lake just outside her mother's B&B. Eight years later, Sadie is the host of a much-loved show about southern cooking and family, but despite her success, she wonders why she was saved. What is she supposed to do? Sadie's sister, Leala Clare, is still haunted by the guilt she feels over the night her sister almost died. Now, at a crossroads in her marriage, Leala has everything she ever thought she wanted--so why is she so unhappy? When their mother suffers a minor heart attack just before Sugarberry Cove's famous water lantern festival, the two sisters come home to run the inn while she recovers. It's the last place either of them wants to be, but with a little help from the inn's quirky guests, the sisters may come to terms with their strained relationships, accept the past, and rediscover a little lake magic.

About Heather Webber:
HEATHER WEBBER is the national bestselling author of more than thirty novels--including Midnight at the Blackbird Cafe, the Lucy Valentine novels, and the Nina Quinn Mysteries--and has been twice nominated for an Agatha Award. She loves to spend time with her family, read, drink too much coffee and tea, birdwatch, crochet, watch cooking competition and home improvement shows, crochet, and bake. Heather lives in southwestern Ohio and is hard at work on her next book.

The Lights of Sugarberry Cove (Hardcover)

**The Snail is pleased to offer personally SIGNED COPIES of this new Alabama novel by Heather Webber.**

This is an exclusive offer from The Snail on the Wall, North Alabama's bookstore without a store.

South of the Buttonwood Tree (Paperback)

Midnight at the Blackbird Cafe: A Novel (Paperback)