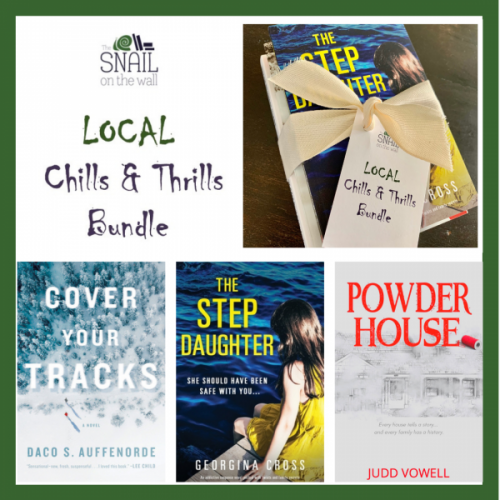 The Snail on the Wall is pleased to offer the Local Chills & Thrills Book Bundle, featuring three suspenseful reads ideal for October's spooky season. Better yet, these three books are all by local Huntsville authors, so the bundle will include signed copies by each author! Read on below to find

We are taking orders now through October 20, with plans to deliver/ship the week before Halloween. Place your order now!

Read below for more info on each book in the bundle:

Cover Your Tracks, by Daco Auffenorde:
Daco Auffenorde was raised in Huntsville and has authored a number of novels and short story collections. Her latest book is a chilling story of love and hate, the devastating power of nature, and the will to survive.

Margo Fletcher, eight months pregnant, is traveling by train from Chicago to Spokane, her childhood home. While passing through an isolated portion of the Rockies in blizzard conditions, the train unexpectedly brakes. Up ahead, deadly snow from a massive avalanche plummets down the mountain. Despite the conductor's order for the passengers to stay seated, former Army Ranger Nick Eliot insists that survival depends on moving to the back of the train. Only Margo believes him. They take refuge in the last train car, which Nick heroically uncouples in time to avoid the avalanche. The rest of the train is hurled down the mountainside and is soon lost forever in a blanket of snow. Margo and Nick, the sole survivors, are stranded in the snowstorm without food, water, or heat. Rescuers might not arrive for days. When the weather turns violent again, the pair must flee the shelter of the passenger car and run for their lives into the wilderness. They must fend off the deadly cold as well as predatory wild animals foraging for food. Eventually, Nick leads Margo to shelter in a watchtower atop a mountain. There, we learn that both Margo and Nick have secrets that have brought them together and threaten to destroy them.

The Stepdaughter, by Georgina Cross:
This is a debut novel by Georgina Cross, who has more books releasing in the next year. The Stepdaughter is set in Huntsville, and is a twisty novel packed with unputdownable suspense about the power and damage of secrets we hide. Perfect for anyone who was totally hooked by The Mother-in-Law and Big Little Lies.

It's a normal afternoon when I walk out the patio doors of our kitchen to check on Mia, my stepdaughter, who is swimming in our backyard pool. But she's gone. My heart stops when I see the back gate is open, her pink, fluffy towel lying folded on a chair. I was just feet away. Why didn't I hear her scream? Who took our little girl? My husband can't understand how I could have let his daughter disappear. And when the police come asking questions, I wish I could wind back time to that normal afternoon when I was cooking lasagna for my family, Mia's favorite. I can tell the officers don't believe me: they've cast me as the evil stepmother. I just wish I could understand the messages I've found from my husband on Mia's phone: I'm so sorry, I still love you. And why his wedding ring is found at the bottom of the pool after Mia disappeared. He never told me it was missing. What else is he hiding? But the detective keeps asking me where I was during those ten minutes when Mia vanished. And I can't tell her my secret. From the way she's looking at me, I know she thinks I did something to my stepdaughter. Mia and I haven't always been that close and sometimes she drives me nuts, just like any normal teenager, but I would never hurt her. I just need you to believe me.

Powder House, by Judd Vowell:
Judd Vowell has published the post-apocalyptic Overthrown trilogy, and now turns to a story of a woman who finds herself in a truly haunted house.

Julie Danner has been running away from home for nine years. She hoped leaving small-town Hopes Ridge and starting a career in journalism would silence the voices in her head causing her to question her own sanity. But when her wheelchair-bound dad calls, asking for help with her unraveling mother, she's forced to go back home and confront the woman she hoped to never see again. If returning home weren't bad enough, the house Julie moves back to may be haunted. At first, she tries to ignore the signs. But Julie soon discovers that she has an ability more powerful than mere intuition - the other side is desperately trying to send her a message. The clues start to add up, to reveal a horrible truth about what happened inside Julie's house long ago, and just how connected to the violent and evil past she might be. While a serial killer still lurks, Julie moves from skeptic to believer, and from journalist to cold-case investigator, enlisting her retired cop father to hunt down a murderer who may be closer than she thinks. Inside Powder House hides the stink of betrayal, lust, and a love twisted beyond anything natural - but will Julie uncover it all before it's too late?