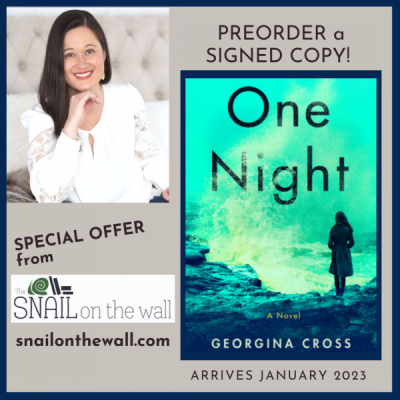 Order a SIGNED COPY of the new thriller One Night by Huntsville author Georgina Cross.

To order: add the book below to your cart, and type "signed copy" in comments at checkout. This offer is available only through Huntsville's independent bookstore, The Snail on the Wall, in partnership with Bantam Books.

About One Night:
The anonymous letters arrive in the mail, one by one: To find out what really happened to Meghan, meet at this location. Don’t tell anyone you’re coming. In one night, you’ll find out everything you need to know. Ten years after her murder, the letters tell Meghan's family exactly when and where to meet: a cliffside home on the Oregon coast. But on the night they’re promised answers, the convicted killer—her high school boyfriend, Cal, who spent only ten years in prison for murder—is found unconscious in his car, slammed into a light pole near the house where the family is sitting and waiting. Is he the one who invited them to gather? As a storm rampages along the Pacific Northwest, the power cuts off and leaves the family with no chance of returning to the main road and finding help. So they drag Cal back to the house for the remainder of the night. How easy it would be to let him die and claim it was an accident. Or do they help him instead? As the hours tick by, it becomes an excruciating choice. Half of the family wants to kill him. The other half wants him to regain consciousness so he can tell them what he knows. But if Cal wakes up, he might reveal that someone in the family knows more than they’re letting on. And if that’s the case, who is the real killer? And are they already in the house?

About Georgina Cross:
The author of Nanny Needed, The Stepdaughter, and The Missing Woman, Georgina Cross worked as a journalist and then spent nine years in business development for an aerospace and defense contractor before joining the Huntsville/Madison County Chamber of Commerce. She now writes full-time and lives in Alabama with her husband and their combined family of four sons.

One Night: A Novel (Paperback)

The Stepdaughter: An addictive suspense novel packed with twists and family secrets (Paperback)